Since Brexit and the end of the free movement with the European Union the Skilled Worker visa has become an increasing necessity for employing skilled staff and it is now by far and away the most used work visa route.

Those eligible to apply for a visa via the Skilled Worker route must have a job offer from a sponsoring UK employer and meet both the English language and salary requirements of the route. There must be a genuine vacancy and the job has to be a role on the Home Office’s list of Eligible occupational codes and going rates of pay, or on the Shortage Occupation list.

Ever since this immigration route replaced the Tier 2 General immigration route on 1 December 2020 we have been advising employers setting up sponsor licences to be able to recruit the talent they need, as well as those using this popular route to come to work for sponsoring firms with a UK presence.

Reflecting labour shortages felt by many employers, there was been a 129% year-on-year jump in work visas to 277,069 including dependants in the Home Office’s latest UK immigration statistics for the year ending March 2022 (50% higher than March 2020 – pre-pandemic restrictions.) 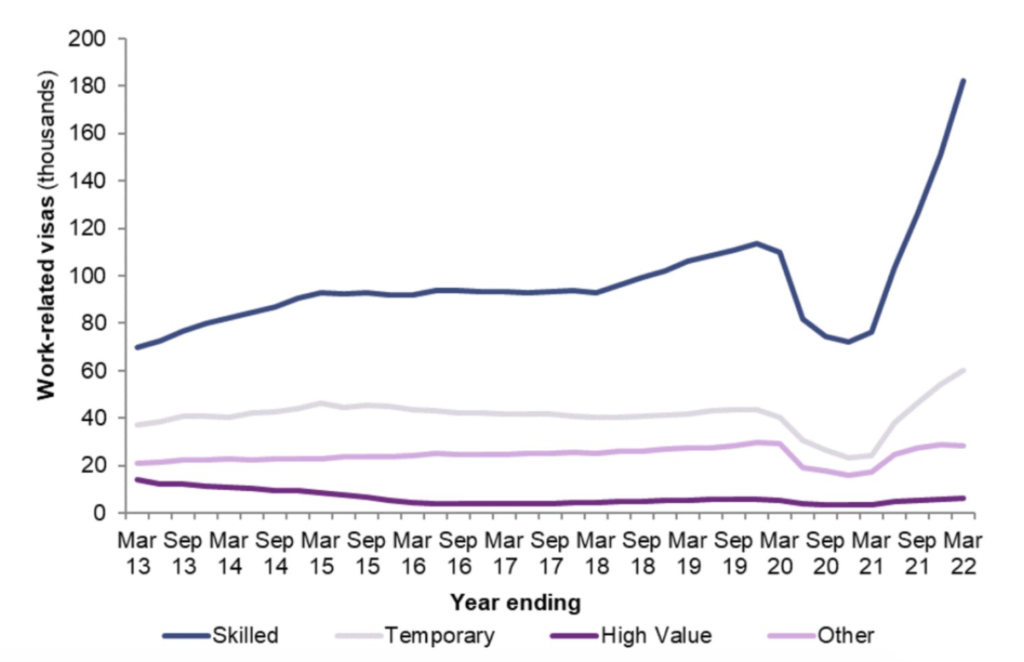 The Skilled Worker route (66% of work-related visas) saw the largest hike (+139% year-on-year, +66% from the year before). India is still the top nationality (44% of skilled worker visas granted). There was was a big increase in Certificate of Sponsorships granted too, mostly for Health and Social Care (which falls within the Skilled Worker category).

The latest Home Office-commissioned research chimes with what many sponsors and employees using the Skilled Worker visa route have told us about why they use this sponsored immigration route.

The increase in Skilled Worker sponsor licences and certificates of sponsorships is only to be expected. Since freedom of movement ended, it is the only option for many employees and employers trying to fill a wide range of skilled vacancies amid record UK labour shortages.

Numbers will be driven up as less skilled occupations are added to the Shortage Occupation list. For instance, although senior care workers are at skill level RQF3 and have been eligible since the Skilled Worker visa replaced Tier 2 General, the addition of other care workers to the Shortage Occupation list brings them within scope of Skilled Worker visas, increasing use of this route.

Why employers use Skilled Worker sponsorship 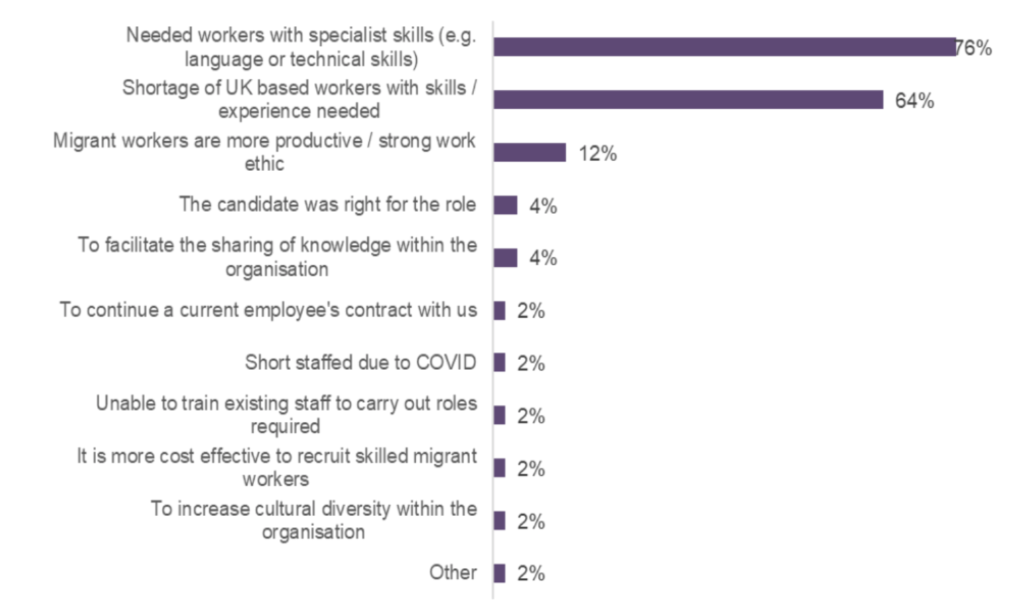 All the sponsors surveyed expect to hire new employees in the next three to six months in roles for which a Skilled Worker would be eligible. They said vacancies would most likely be filled by UK workers, followed by sponsoring an applicant for the Skilled Worker visa route.

Sponsors surveyed had used a wide range of methods to find Skilled Workers. Half used multiple channels. The most common methods were targeted advertising on social media (including LinkedIn), advertising on UK job websites or advertising on employers’ own website.

Why employees use the Skilled Worker visa

Researchers found that the Skilled Worker visa influenced the decision to work in the UK for just over half (54%) of the employees surveyed, mainly thanks to the ability to extend the visa and the ability to settle with dependent family.

Time spent in the UK sponsored as a Skilled Worker counts towards settlement, a route to citizenship that people can embark on after five years, and bring eligible dependent family members on.

The most important factors for skilled workers when considering working and living in the UK were not visa-related; most surveyed cited familiarity with the English language (92%), opportunities for career progression (92%) and a job fit for their skill set (88%).

Important factors when considering coming to or remaining in the UK (GOV.UK)

Due to different factors such as Home Office backlogs, Brexit and processing the different options for refugees from Ukraine, waiting times for people applying for visas outside the UK have been erratic in 2022. In July UK Visas and Immigration (UKVI) announced that most work and investor visas, including Skilled Worker visa applications, are currently taking on average four weeks to process. This is down from an average of six weeks earlier in the year and should be back to the target of three weeks at some point.

Unfortunately, since the war in Ukraine broke out paying extra for priority or super priority visa services has been  suspended for new study, work and family visa applications.

We help with all stages of such applications and identify the best options for those seeking to work in the UK or employers looking for a trouble free route to bring staff to Britain. To find out more about the Skilled Worker visa route as well as other sponsored and non-sponsored work visas , contact us on +44 (0) 207 033 9527 or enquiries@vanessaganguin.com